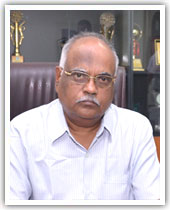 The Rajmata Vijayaraje Scindia Krishi Vishwa Vidyalaya was established by Government of Madhya Pradesh on Dated 19th August, 2008 as second Agricultural University by bifurcating the JNKVV, Jabalpur. University has grown into a diverse innovative institution of higher education, pursuing excellence in the fields of teaching, research and extension in agricultural sciences. Over the years, the University has sought to make a major contribution in improving the quality of human life in the region through its research-led initiatives in agriculture, environmental related issues and a host of other modern-day challenges including the production of quality seed and genuine planting material. The structure of its activities is rationalized, with emphasis on its distinguished strengths, management of education and development of quality man power and in this direction notable success has been achieved. In addition to the diverse activities related to agricultural sciences, RVSKVV has a strong emphases on farmers skills improvement and empowerment through the twenty one KVKs in the various districts. Teaching and learning quality has been steadily improving in recent years and a large number of capable man powers has been trained here.

In case of research programme, University finds a very special place in NARS through the coordinated projects in pulses, oil seeds, cotton, cereals, horticulture and natural recourses management. Exceptional research work on chickpea improvement, CMS based pigeon pea hybrid, efficient water management for boosting the productivity of other major crops like cotton, soybean, mustard, wheat, medicinal and aromatic plants are some of the noteworthy contributions of the University. RVSKVV is also making sincere efforts to generate cutting edge technologies for enhancing crop productivity was done by the University. Thrust is also given on seed replacement in the state by producing quality seeds of important crops.

With extraordinary explosion of knowledge, speedy travel, evolution in information technology and increasing awareness of global concerns, the University has felt the need and realized the value of establishing closer ties with national and international organizations, which will in future ensure attaining new heights by this University. The University has hosted a number of National Level activities which has certainly left an imprint on the national map. In due course of time, the accreditation of the university also done by the ICAR, New Delhi.

Prof. Surapaneni Koteshwara Rao is an accomplished plant breeder by profession and an able research manager as well as administrator. He was born in Polukonda, Krishna District of Andhra Pradesh, India on 8 March, 1952. He obtained his Doctorate and Master Degree from JNAU, Jabalpur with a Certificate of Honours & B.Sc. from Andhra University (A.P.) having a brilliant academic record. He was awarded Department of Atomic Energy Scholarship for his Ph.D. program and served more than 36 years in JNAU of Madhya Pradesh.

He has been figured in various committees of national agriculture research and development system like Board of Directors of Management Committee of MP Seeds/ MPSOKA/ MPSSCA/ M.P. State Cooperative Seed Federation and Marketing Ltd., Member of RAC, IMC, QRT of several ICAR Institutes in the country. Member of the Task Force Committee to streamline and ensure the registration of Extant notified varieties of ICAR-SAU system with the protection of PVPFRA, Member of the Task Force on Documentation, Indexing and Cataloguing of farmers’ varieties (Task Force 02/2014). PPVFRA, MOA, GOI (2014), Co-convener of the Fifth Dean Committee constituted by the ICAR for Agriculture Science (2014-2015), Chairman, Research Advisory Council Indian Institute of Seed Research MAU ICAR (2014-2017) and Member of accreditation team of ICAR.

His contributions have been recognized with several awards such as Rafi Ahmed Kidwai Award for Biennium 2007-2008 for Outstanding Contribution in Field of Crop Science by Indian Council of Agriculture Research, New Delhi, India, Dr. Kailash Nath Katju Award for Year 2008 for Contributions in Science by Government of Madhya Pradesh, ICAR Award for Outstanding Inter-Disciplinary Team Research in Agriculture and Allied Sciences for Biennium 2007-2008 for Outstanding Research Contribution in Soybean Improvement, Achievers Award 2010 for Contribution in Agriculture Development by Society for the Advancement of Human and Nature (SADHNA) during 2011. He is actively associated with several professional societies and awarded Fellow of the National Academy of Agriculture Sciences, India, Indian Society of Pulse Research and Development and Indian Society of Genetics and Plant Breeding.

Publish modules to the "offcanvs" position.